Artificial intelligence at the service of man and technologies

What is artificial intelligence?

It is “the set of theories and techniques used to create machines capable of simulating intelligence” (Wikipédia). 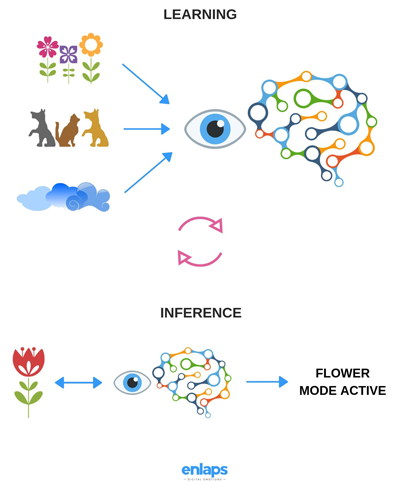 When we talk about Artificial Intelligence, we usually talk about Machine Learning, then Deep Learning, but also Reinforcement learning.

A. The Machine Learning (or weak AI) which goes through a “supervised learning” by the man: by learning in a very structured way, the AI ​​is then able to infer an object, a situation, etc. This one is very used in the companies.

B. Deep Learning belongs to Machine Learning and works through deep artificial neural networks simulated by a computer process. It is increasingly used, especially in the field of research.

C. Reinforcement learning, the principle of which is that an “agent” explores a space, makes an action and receives a reward according to that environment and its action. He takes note of it and learns by trial and error.

There are also three types of learning:

A. “Supervised: all data is tagged and the algorithms learn to predict the result of the input data.

B. Unsupervised: Not all data is tagged and the algorithms learn the inherent structure from the input data. [His result is somehow unknown but his lesser need in terms of human resources gives him an advantage in terms of rapid technological implementation according to his “intelligence”.]

Some examples of using artificial intelligence

Among the infinite uses of artificial intelligence according to the domains, it is possible to list:

A. Artificial intelligence now fighting poaching: in partnership with Intel, TrailGuard AI from NGO Resolv will be deployed first in the African reserves, then in Asia and South America, and will identify the poachers before they kill an animal and alert the rangers To learn more about TrailGuard: https://www.numerama.com/tech/452516-ces-cameras-melent-ia-et-reconnaissance-de-formes-pour-lutter-contre-les-braconniers.html

B. An artificial intelligence to count animals of the same species thanks to NVIDIA (source NVIDIA):

The hidden face of artificial intelligence

The use of artificial intelligence is sometimes disputed for ethical reasons, particularly because of its great potential …

Among these ethical questions, it is possible to mention:

More than 1,000 business leaders, including Elon Musk, and scientists, including Stephen Hawking, wrote an open letter in 2015 to completely ban the use of AI in the field of armaments. For more information on this letter: https://www.theguardian.com/technology/2015/jul/27/musk-wozniak-hawking-ban-ai-autonomous-weapons or to read it: https://futureoflife.org/ai-open-letter/?cn-reloaded=1

n the next article, we will focus more specifically on AI in the field of photography / video / timelapse.