The information below is required for social login

For some time now we have been conducting an experiment in understanding public spaces with a large French metropolis.

The aim is to regularly capture what is happening in a place and identify trends, to better understand behaviours, and ultimately to help policy makers make the best decisions based on facts and not impressions.

The data we have accumulated so far has allowed us to create an average profile of traffic at a hub by day of the week. We study among other things pedestrian and vehicular traffic (cars, buses, bicycles, …). You can see below the smoothed data, hour by hour, cumulated over the beginning of the year 2020 (January to beginning of March). 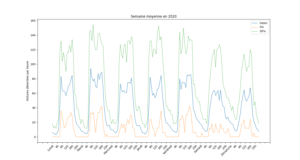 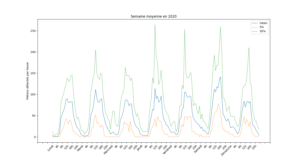 In the graphs above, the blue curve represents the average detections in the first weeks of 2020 (cars up, pedestrians down). The dashed 5-percentile and 95-percentile curves show the variability from day to day.

A different trend can clearly be seen for weekdays and weekends. It is also interesting to look at the influence of the weather on behaviour, but that is not the purpose of this post.

Impact of measures against the spread of COVID-19

What interests me today is to observe the impact of the speeches and measures taken to counter COVID-19 on these behaviours.

A quick reminder of the chronology of events:

Did all these events have a visible impact on the area observed? Let’s take a look.

It is interesting to note the difference in impact between pedestrians and cars. 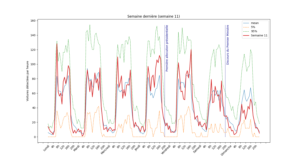 On the Friday and Saturday following the first presidential address, car attendance was unchanged. Since the measures announced were ultimately only an incentive to telework, the behaviour of people going to work clearly did not change overnight.

As a result of the closure of public places and the ban on gatherings, traffic seems to have slowed down slightly on Sundays. 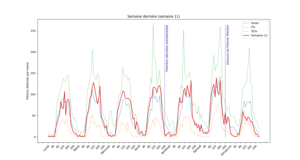 The change is more pronounced for pedestrians. As the observed crossroads is also a place to go out (bar, restaurants, cinema), Sundays were marked by a sharp drop in attendance. We find ourselves barely above the 5th percentile. I remind you that this means that on a classic Sunday, only 5% of the captured images will show such a low attendance.

However, you will notice that the speech of March 12 does not seem to have had any noticeable effect on pedestrian behaviour either.

This week, however, we have seen a drastic change in policy that has clearly impacted our behaviour. 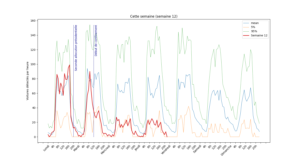 While Monday remains in the average for car traffic, there is particular activity on Tuesday morning and a clear slowdown from noon onwards (from 90 cars/hour to around 30). This behaviour is confirmed in the following days, when we reach the 5th percentile. The traffic is not stopped but the measure seems to be respected. 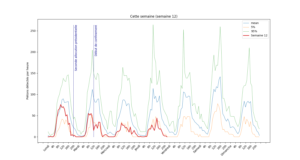 As far as pedestrians are concerned, the drop in attendance is visible as early as Monday morning. People continue to move until Tuesday lunchtime, much less afterwards. On Thursday, for example, there is a peak of 43 people per hour at 3 p.m., where usually more than a hundred people can be seen. The analysis of the images allows us to see that at that moment a queue formed, our fellow citizens respecting the distance between each person!

Our analysis tools based on artificial intelligence allow us to quickly measure the impact of concrete policy measures.

COVID-19 forces us to make radical decisions for the good of all, and impacts are quantifiable in many areas.

The cameras you deploy can be used to observe much more than just what appears in the picture. They allow you to gain real knowledge of your infrastructure over the long term, in a reliable, fast and repeatable manner. Much more than can be achieved through simple counting by deploying people on a temporary basis.