Enlaps, king of the time lapse camera made in France!

Find below the article written by studioSport following their meeting with Enlaps and their test of the camera TikeePRO.

A big thank you to them.
Find the Tikee timelapse products by Enlaps on studioSport: here.

You can also read the test on the blog of studioSport: here.

Created in 2015 by a team of young shoots led by Antoine Auberton-Hervé and Benoit Farinotte, Enlaps proposes an innovative product, a camera named Tikee. The Tikee allows you to capture, edit and share timelapses (videos made from photographs of a long event taken at regular intervals) of professional quality.

Ultra-efficient and economical, the Tikee camera combines top-flight technical characteristics and online application for a fun and extensive use. You will be able to set up your Tikee camera via your smartphone (MyTikee app) and enjoy unlimited autonomy thanks to the integrated solar panel (facing south).

Launched by a Kickstarter project in 2015, Enlaps relied on crowdfunding to make itself known and quickly obtained results by collecting a prize pool of € 183,203 and reaching nearly 160 contributors. An exponential evolution follows in 2016 and a great success at the CES in Las Vegas with the prize of the category “Digital Images”. The result is an international reputation and nearly 1000 Tikee cameras sold in 2018! A blazing success motivated by the desire to become the “GoPro” of the camera timelapse.

There are two models of cameras: the Tikee and the Tikee Pro. Very close technically, they are differentiated by their modes of transmission. The Pro version will work via a 4G chip (like a mobile phone) and via Wi-Fi while the standard version will only offer Wi-Fi. The Pro version will also offer the recording of photos in DNG, a universal RAW format. offering a better dynamic range for image processing. Designed to satisfy both the general public and image professionals, the Tikee Pro camera can be used in any environment with 4G coverage. This will allow you to recover your snapshots remotely without having to connect to a Wi-Fi hotspot. 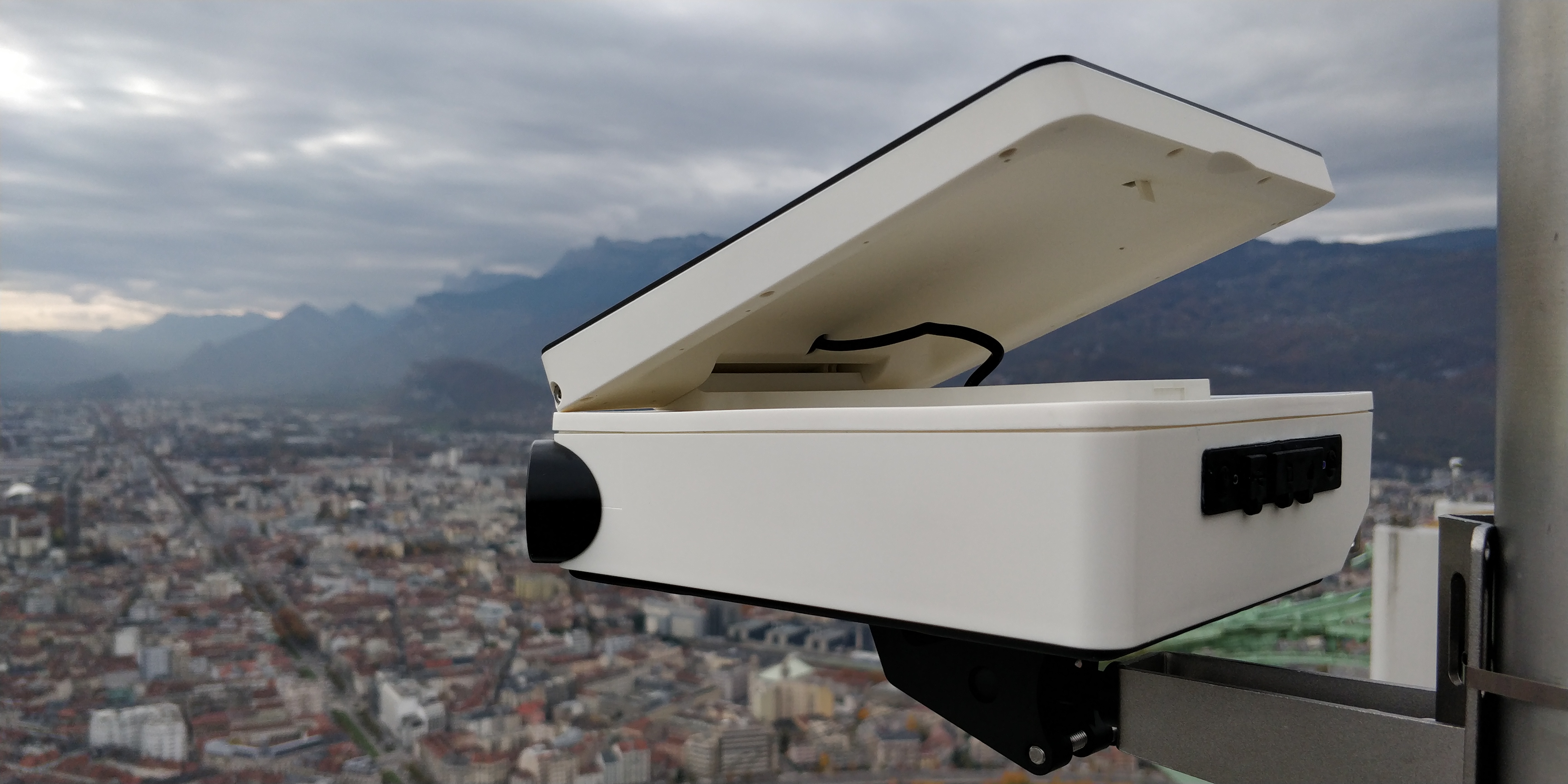 Equipped with two 16MP wide angle sensors, the Tikee / Tikee Pro camera will capture 220 ° images in 4K! Weatherproof (IP54) and ultra-resistant, it merges two images previously saved on its memory card to render a precise and perfectly defined photograph. Light and compact, this timelapse camera takes advantage of a high efficiency solar panel that allows it to be used continuously. Capable of recording images in 4K +, Tikee and Tikee Pro cameras dominate the camera timelapse market technically. You can easily insert a timelapse from the Tikee in a promotional video made with professional cameras and drones.

Note: Enlaps recommends a full charge on mains when first used. You can then enjoy the solar panel and its unlimited autonomy.

A fun application for a connected camera

Plug & Play, Tikee cameras work via a mobile application. This simple and ergonomic interface will allow you to organize your “timelapse” sessions while viewing the filmed images on a daily basis. Indeed, you can use your camera in “continuous mode” and perform follow-ups of several months without intervening on the camera Tikee. Very practical to follow the evolution of a construction or demolition site, a cultural event, realize artistic timelapses of landscapes or your travels, the Tikee camera is automatically set to provide you with the best images according to the brightness. Completely autonomous, it is also secure. Associated with the application (via a user), it can not be hacked through an automatic online check. It will be imperative that the owner manually “releases” the Tikee so that another person can connect to it.

About fixing, Enlaps thought while incorporating a 1/4 “screw pitch that makes his camera Tikee compatible with most accessories market. You can easily secure your material by keeping it out of sight while finding the best position to capture unique images. You will also find the range of accessories for Tikee (available on our website) which includes a storage case, a stainless steel arm and a specific reinforcement.

In order to discover the camera Tikee where it was thought, one of our product manager has responded to the invitation of Enlaps and then went to their offices near Grenoble. Here is his feedback:

“Welcomed by one of the founders of Enlaps on arrival in Grenoble station, I am surprised by the summer sweetness that reigns: no less than 22 ° C for a month of November! We spend my business at the B & B before going to downtown Grenoble for dinner …

On the return of the restaurant, we decide to install a camera Tikee to capture the sunrise on the massive Belledonne, located just in front of the room of host. This will allow us to see the operation as well as the complete Workflow to achieve a timelapse with the solution proposed by Enlaps. The night is well installed on Meylan (near Grenoble where my accommodation is for the night), so we install the Tikee in the light of flashes of our smartphones. In a few moments, the camera is in position. It is now time to configure it using the mobile application “Enlaps” available on iOS & Android. Despite some comments from the two leaders about the application and how to configure the Tikee, only a few minutes were enough to complete the implementation of the Tikee. We must now wait until the next morning to admire the result.

For a first contact with the Enlaps solution, I am surprised by the disconcerting ease with which we have set the camera to make a timelapse. Especially when compared to the classic workflow to achieve a Time Lapse. Namely no knowledge in photo and video is necessary to make timelapses with the Tikee since all camera settings are managed automatically.

Timelapse realized at the guest room

The next morning, we pick up the Tikee before going to the Enlaps offices to meet the rest of the team. The reception is once again very pleasant and friendly.

We take a little time to discover all the features offered by the online platform My Tikee. The generation of timelapses is fully automated and the few possible settings such as timelapse duration and framing management are accessible to all!

A filter function is also present in the online interface. Its principle is simple: it allows to select a set of photos taken meeting the selected criteria. This function will prove extremely useful in the management of your timelapses and will undoubtedly save you considerable time. It can be relatively tedious to manually sort some photos among all the photos taken during a timelapse of several months. 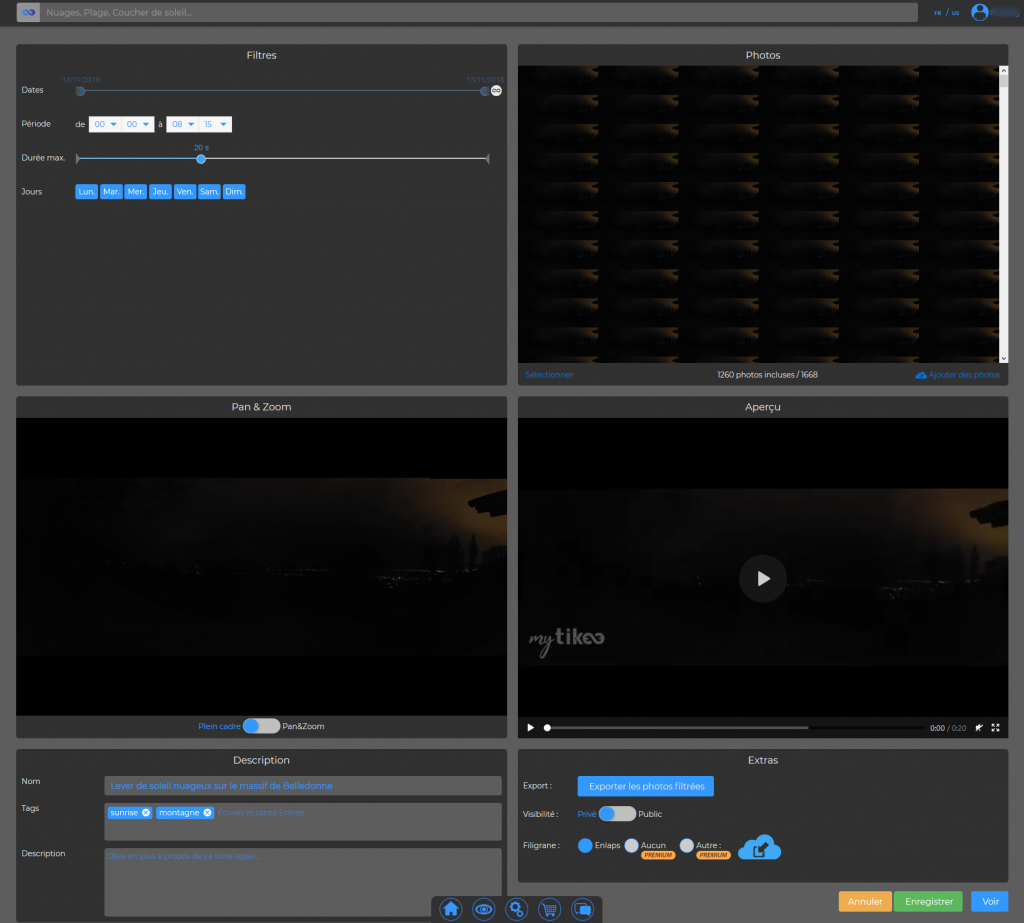 Timelapse editing page on My Tikee

In order to create a timelapse video, My Tikee requires a minimum of 100 pairs of photos. The camera consists of two lenses, two photos are made at each trigger and are merged when imported on the online platform. My Tikee will then use the first hundred pairs to find the best possible fusion and thus avoid the appearance of artifact.

The import on My Tikee can be done in two ways: either automatically thanks to a Wifi or 4G connection (the camera Tikee sends to the server a set of photos at regular intervals of time), either manually by recovering the microSD card from Tikee to import photos from your computer. Note that the latter method will be more tedious with timelapses of long duration given the volume of photos.

My Tikee offers simple editing tools, such as Pan & Zoom management and timelapse duration to bring dynamism to your video.

Premium features are also offered by Enlaps, for a subscription price of 12 € / month. This Premium subscription will give you the opportunity to:

Installation of the Tikee at the fort of the Bastille

Combining the useful with the pleasant, we take advantage of this new day of sweetness to go to the heights of Grenoble, more precisely to the fort of the Bastille offering a panorama on the “Y Grenoblois”, to install the Tikee cameras. It’s time for me to set my first Tikee: in a few moments, I’m connected to the Tikee and configure the short-term timelapse with a photo taken every 5 seconds. Finally, it is time to select if you want to send the images in the Cloud and / or if you also want to store the original images on the SD. It only remains to start the sequence after giving it a name. And that’s all ! Just wait to have enough material to create our timelapse …

It is already time for me to come back to my Normandy. Antoine wanted to show me the new features offered by the mobile application currently in the test phase. This is an exclusive and we thank the Enlaps team for that. Here is in image the new interface of the mobile app Enlaps: 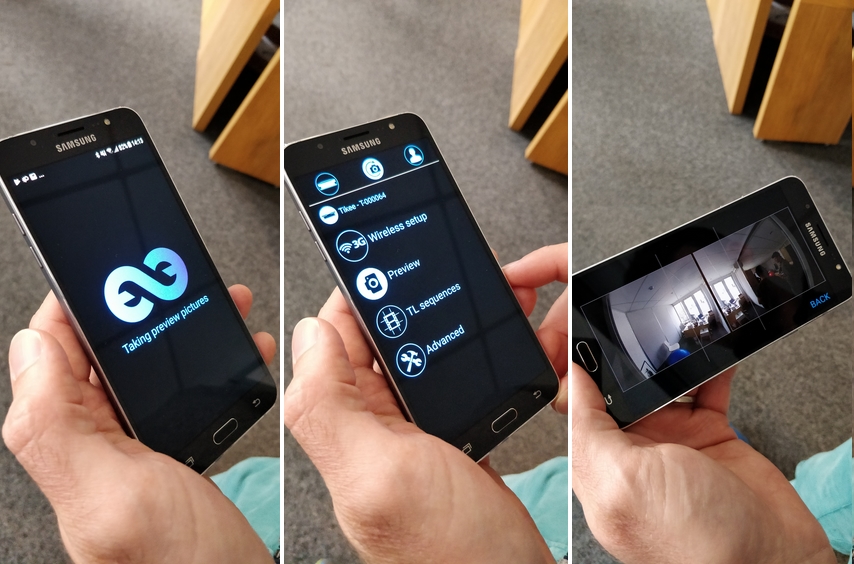 It now sports a dark theme that will save a few percents of battery; but the main novelty is the appearance of the Preview function so far absent! This function makes it possible to ensure the proper framing of the Tikee by ordering the taking of a photograph on the camera. A feature that proves to be extremely practical, although the panoramic coverage of the Tikee can not miss anything of your scene! Finally, this new version of the application should arrive on your smartphones in the coming weeks.

I wanted to thank the entire Enlaps team for their welcome, especially Antoine and Benoit who gave their time to explain in detail the operation of the Tikee and their excellent practical advice on the use of the Enlaps solution.

The Enlaps solution is really accomplished! It offers the possibility to everyone to achieve perfect timelapses without the need for technical knowledge in photo and video. Everything is thought to be intuitive, both on the Tikee’s setting and on the Cloud for the generation and edition of the timelapse. Its steerable solar panel allows long-term use in total autonomy, an essential point on which creators of timelapse can count.

We would have liked to have the ability to manually adjust the Tikee camera settings. Indeed, video enthusiasts could play on these parameters and give free rein to their creativity! Maybe Enlaps will be able to integrate that in the future through a new update … ‘[/vc_column_text][/vc_column][/vc_row]