50% off accessories with the purchase of a Tikee 3 PRO - discount in the shopping cart*.

How to correct the horizon of a timelapse made with Tikee?

Thanks to the wide field of view (220°), the images made by Tikee have a panoramic format. This is why you can sometimes notice “distortions” if you have installed your camera with tilt: some lines that are straight in reality appear curved in the picture.

Technically, our images are projected in an equirectangular format (more info at wikipedia), but as we do not cover a complete sphere, as in a VR video for example, we have trimmed the edges to only present the part that has content .

It may happen that a camera was not installed perfectly horizontally, or that it moved during the shooting, or that the shooting conditions of the subject did not allow to install the camera. camera horizontally.

For these reasons, you may have noticed a sharp curvature of the skyline that may seem disgraceful.

You will need your panoramic photos [see the blog article Assembling an images sequence into a video] named in chronological order with an index.

We will use the Adobe Premiere Pro editing software, which now includes a suite of VR plugins that we will need.

For this part, we invite you to reread the articles of blogs [Assembling an images sequence into a video].

In the example we will take for the rest of the article, the camera installed during the Vivatech 2019 show was oriented downwards to capture the maximum exponents. But, one observes an annoying curvature on the skyline (the windows). In this tutorial, we will straighten this line and crop to focus on the assembly of exhibitors stands.

The fundamental concept that we will use later is “sequence composition”.

The principle is that a sequence, in the Adobe Premiere sense, has image size, frame rate, preview, and so on properties. and contains a set of video clips. But a movie can also be seen as a unique video clip that can be integrated into another movie. The latter may have different parameters.

Therefore we are going :

Integration into a complete equirectangular

The equirectangular format is conventionally used in 360 imagery. It allows to represent a complete sphere: 360 ° horizontally, 180 ° vertically.

The Tikee does not capture all this field of view, but only a portion: 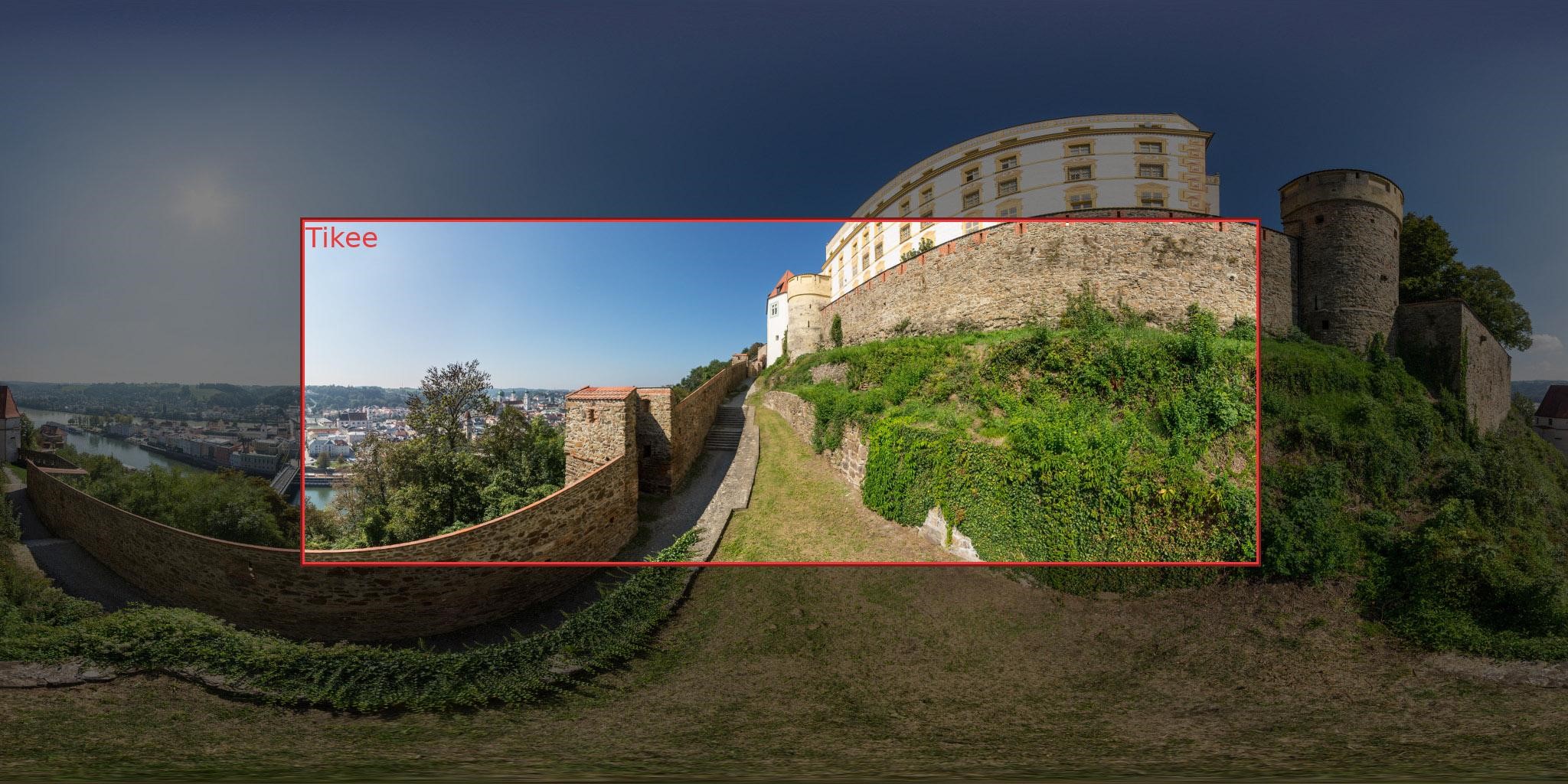 To be able to use effects “VR”, it is thus necessary to create a sequence which will have the size of an equirectangular containing the view Tikee: 6960×3480 (to be adapted according to the initial resolution of the sequence with the formula: HEIGHT = ORIGINAL_HEIGHT / 0.441 and WIDTH = 2 * HEIGHT) for a source image of 4260×1534. 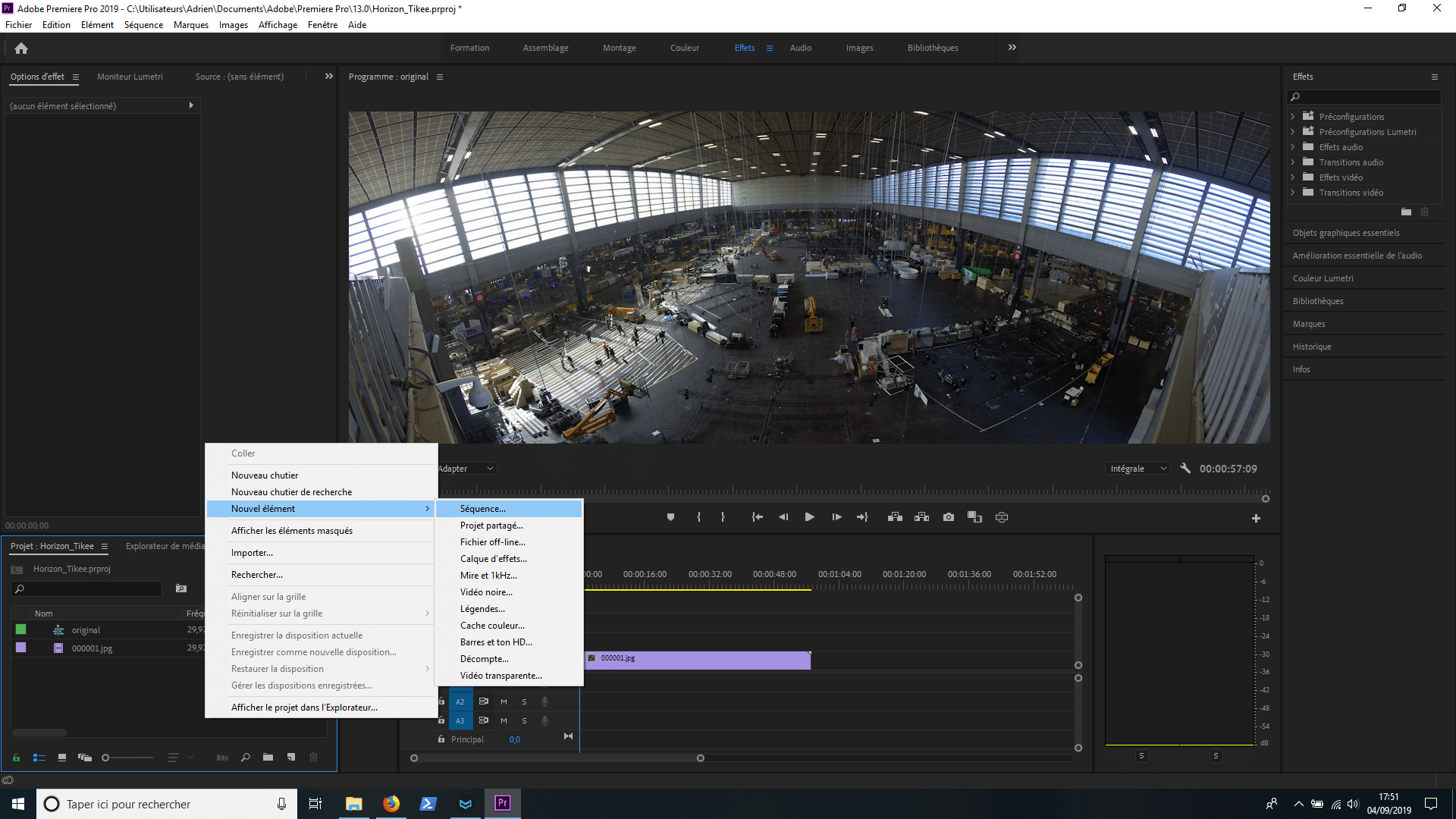 In the settings of the new sequence, enter the required dimensions: 6960×3840 in our case: 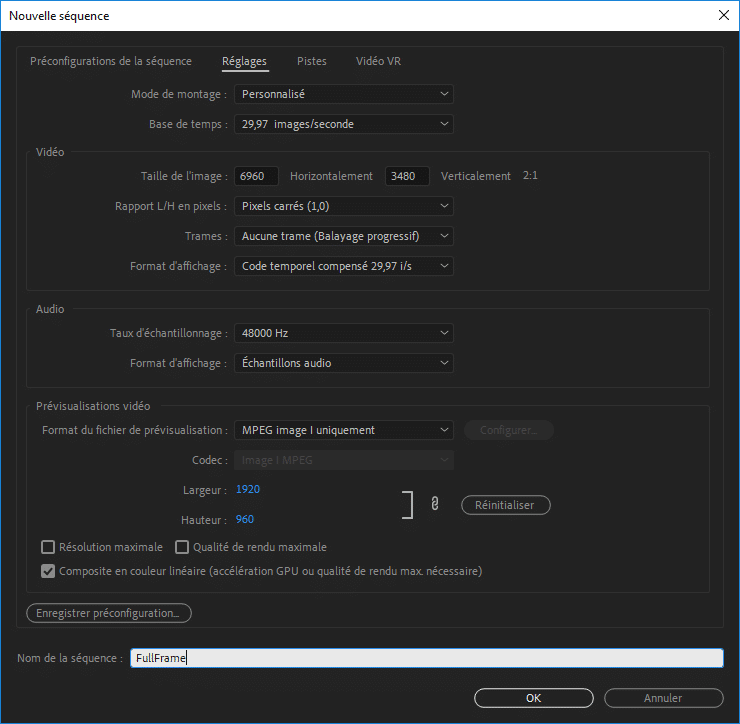 Rename the sequence to “FullFrame” to be able to distinguish it from the others in the following. 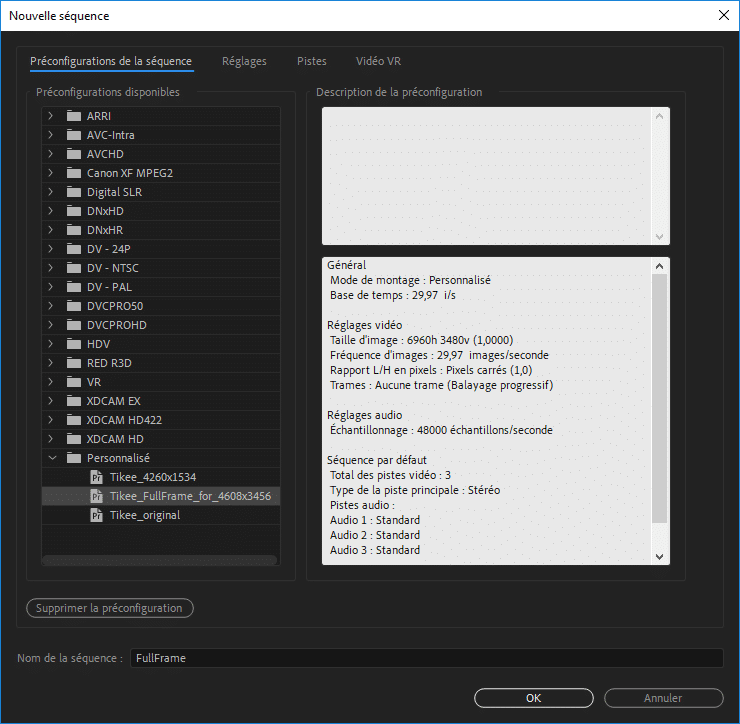 You now have in your bin a new empty sequence named “FullFrame”. Add the “original” sequence by dragging it into the timeline: 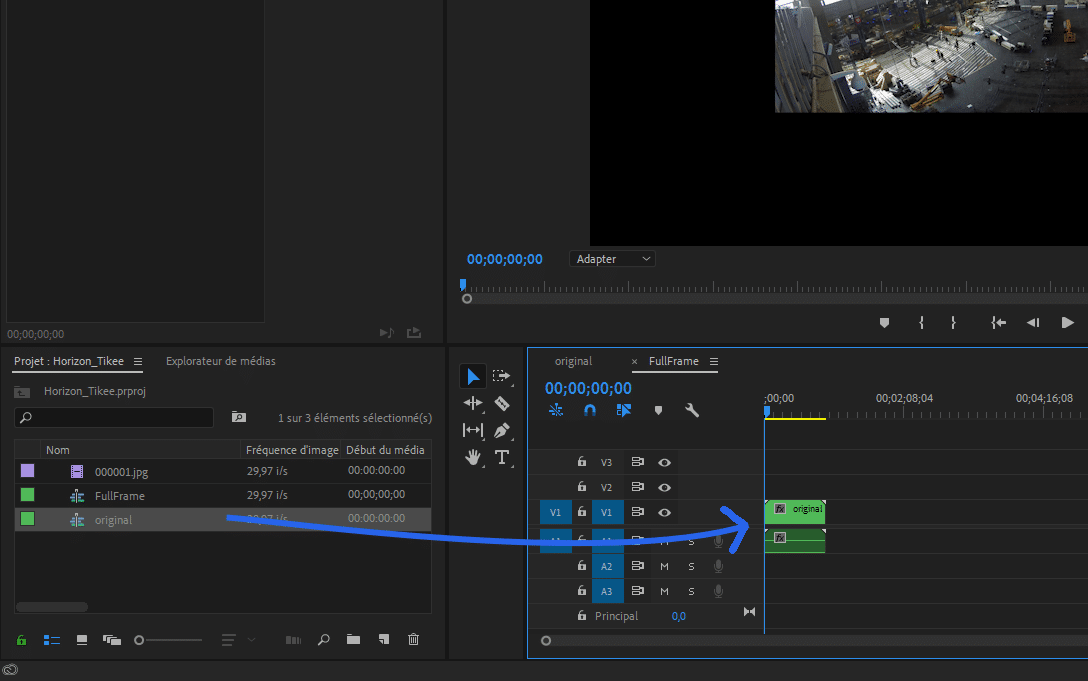 You will then have a warning message telling you that the sequences are not the same size. This is what we are looking for, so keep the existing settings.

You now have a new sequence “FullFrame” which corresponds to a complete equirectangular video and contains the images of the Tikee.

Correction of the horizon

We now want to apply an effect from the “Immersive Video” category to this clip. We will then integrate it into a sequence of the same dimension that we will call “FullFrame_horizon”.

You can repeat the first step “Creating a sequence” and select the “Tikee_4260x1534” presets. Name this sequence FullFrame_horizon. 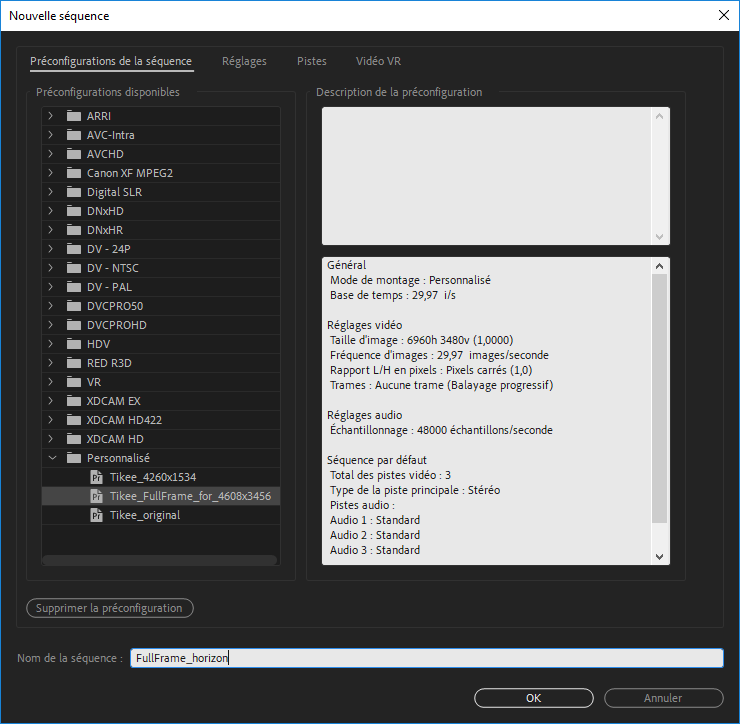 Then add the sequence “FullFrame” by dragging it into the timeline.

To do this, select the effect in the “Effects” panel (frame 1 in the following image) and drag it to the “FullFrame” clip in the timeline.

You then have this effect that appears in the video effects list of the sequence (frame 2). 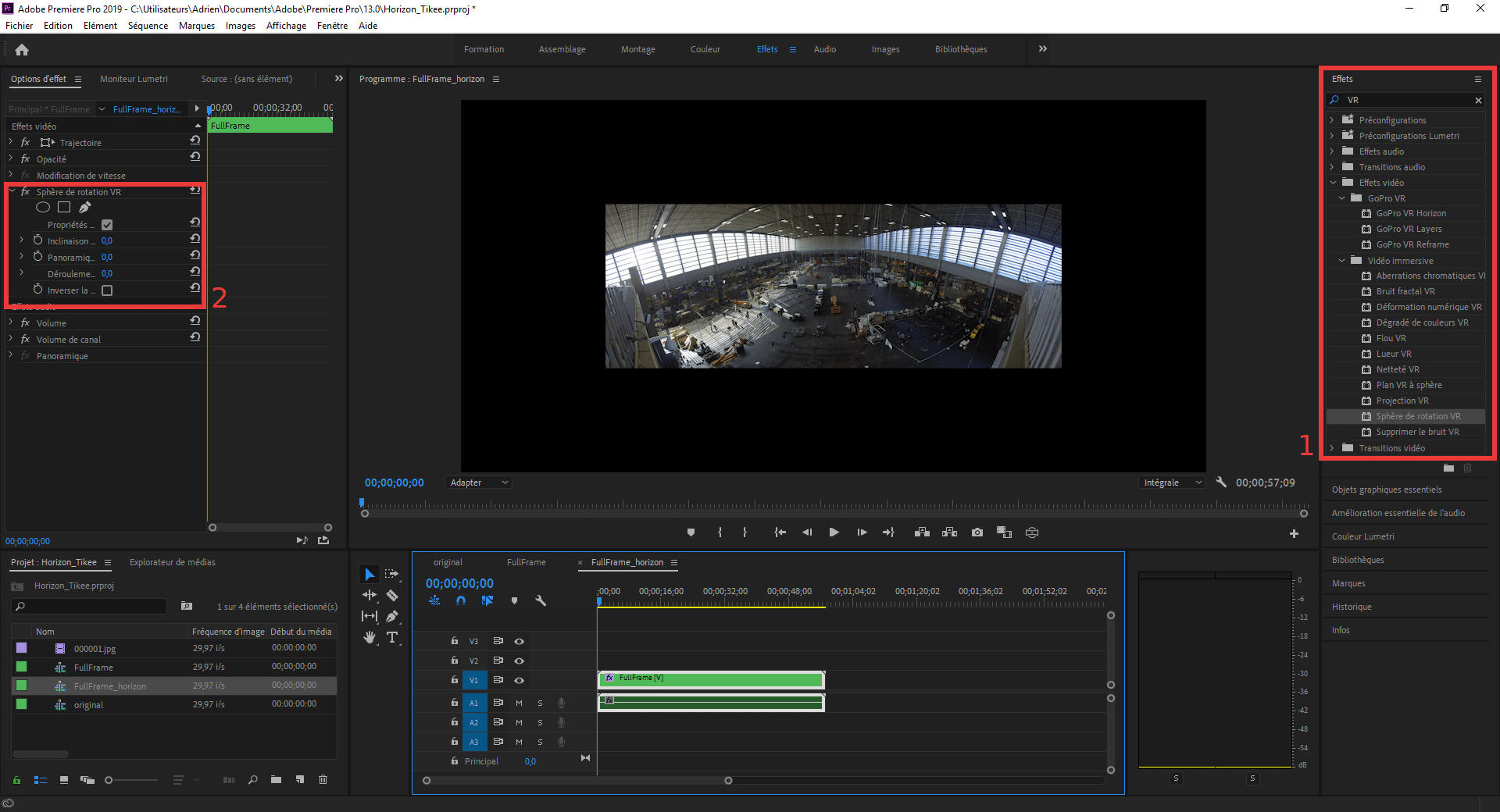 Add an effect to a clip

You can then adjust the “Tilt”, “Pan” and “Ripple” effect settings, which are three angles of the VR sphere, to adjust your horizon. 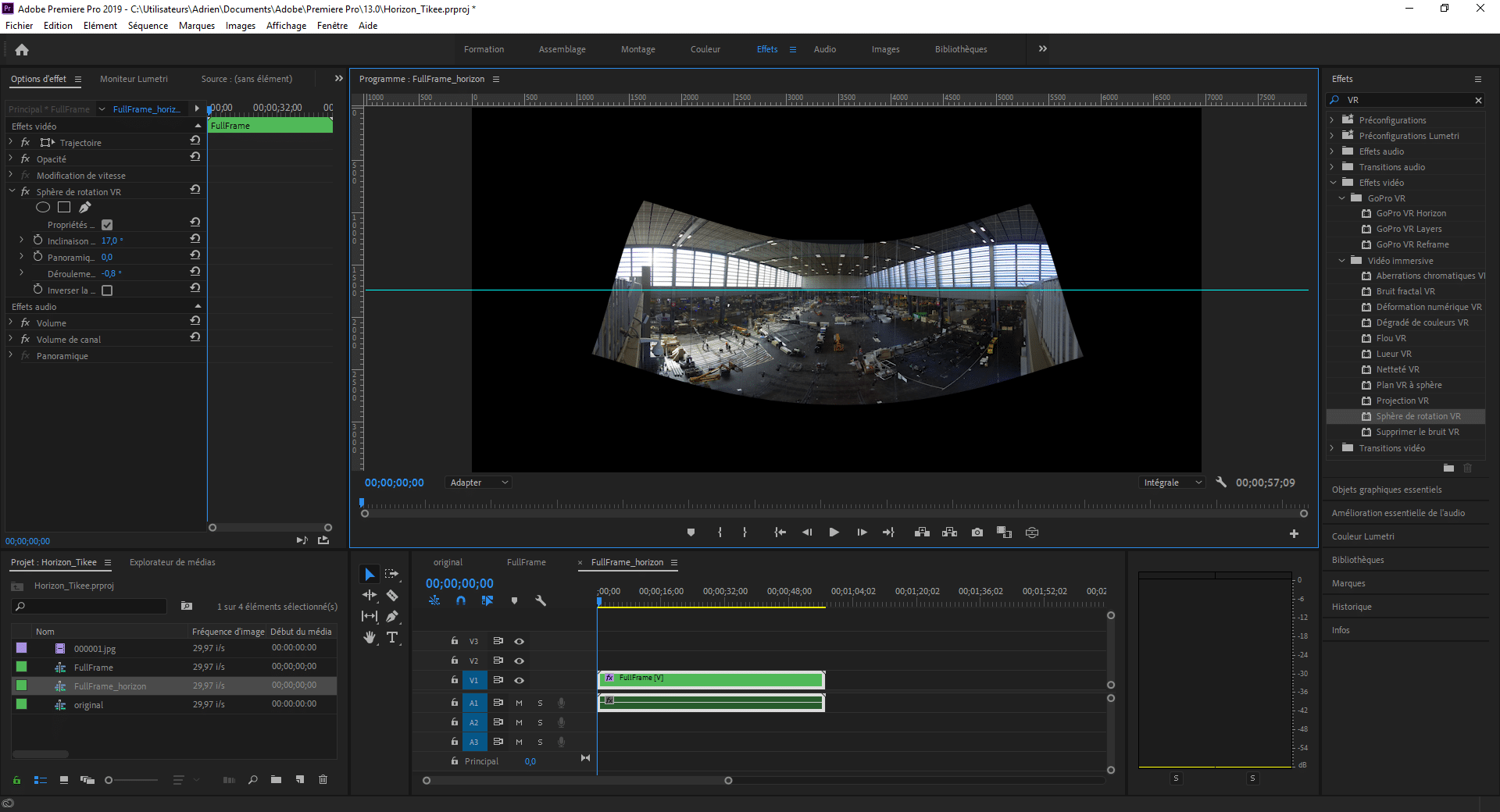 You will notice in the previous image the presence of a marker to help us to precisely adjust the horizon. To add a marker, click in the preview area of the video, then View> Add Marker.

Once you are satisfied with the settings, you can proceed to the next step.

In order to render a video without the black edges, simply create a new “Reframed” sequence with the right dimensions in which we will include the sequence “FullFrame_horizon”.

In our case, we want to preserve a panoramic aspect of the same size as an original timelapse made by Tikee. So we create a sequence of size 4620×1534 that we call “Reframed”. 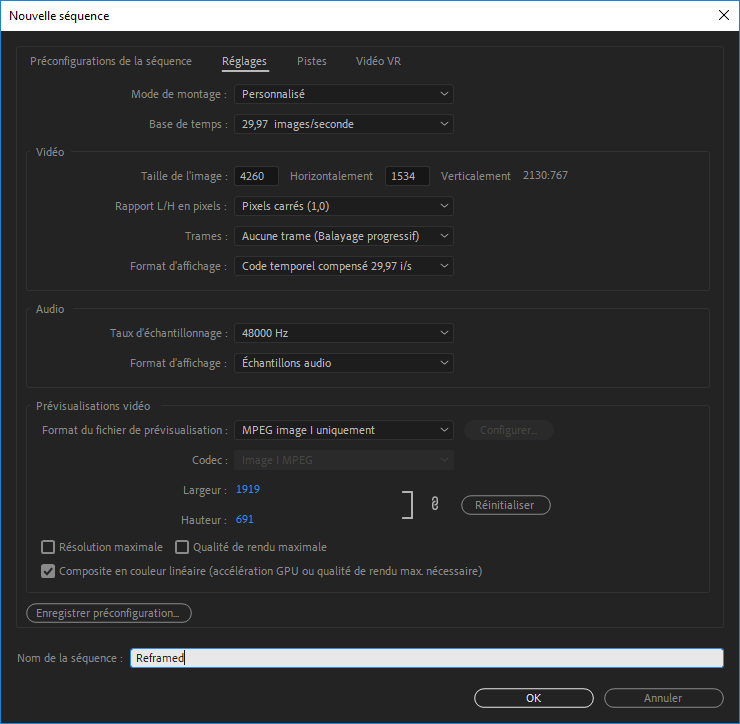 We then obtain the following: 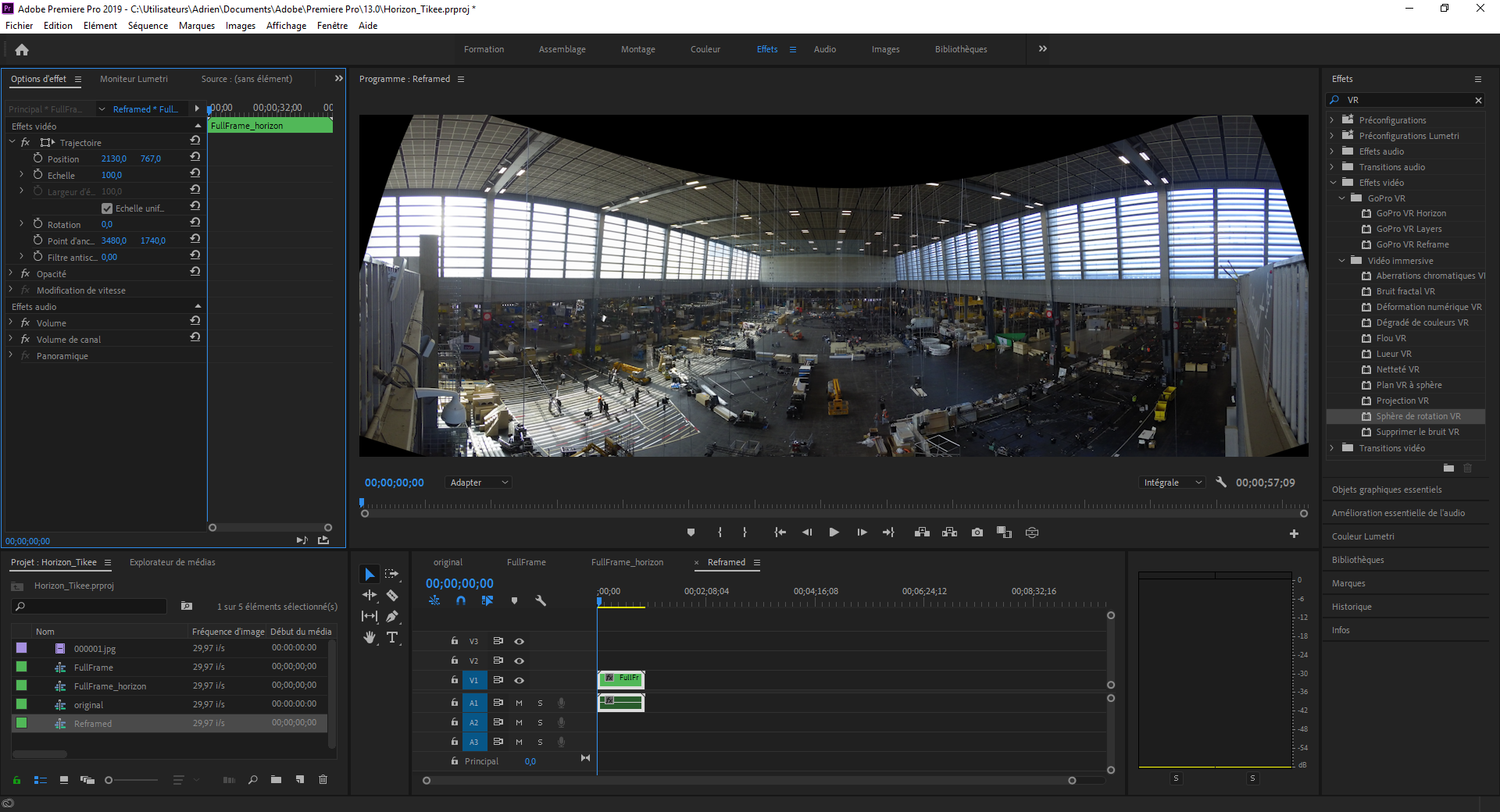 It can be noted that there are always black areas. It will be necessary to adjust the position and scale of the clip in the sequence.

This is done by modifying the “Position” and “Scale” parameters of the “Path” effect, which is activated by default on all clips in the sequence: 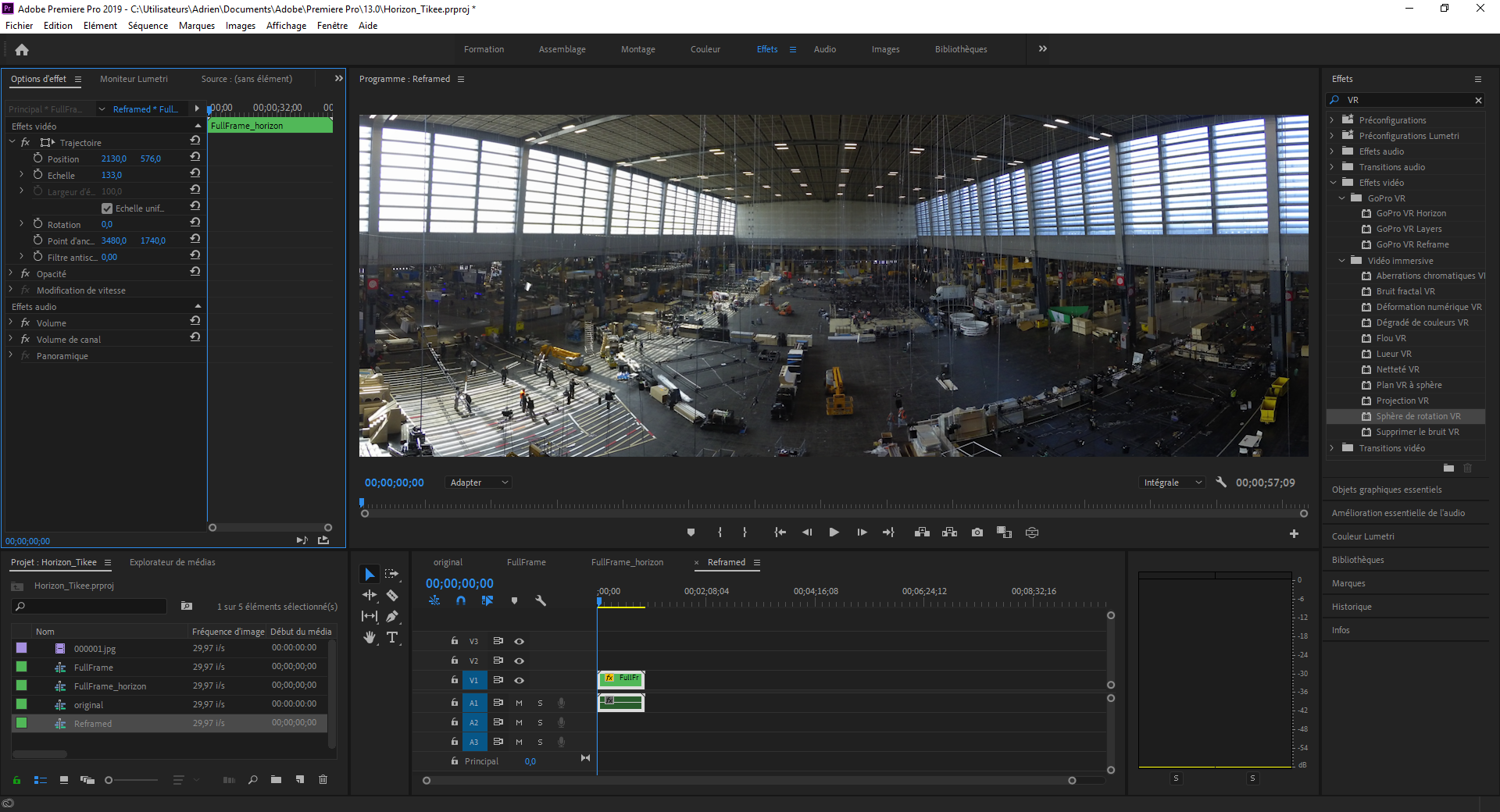 After modifying the “Trajectory” effect

You now have your final sequence ready to be rendered. 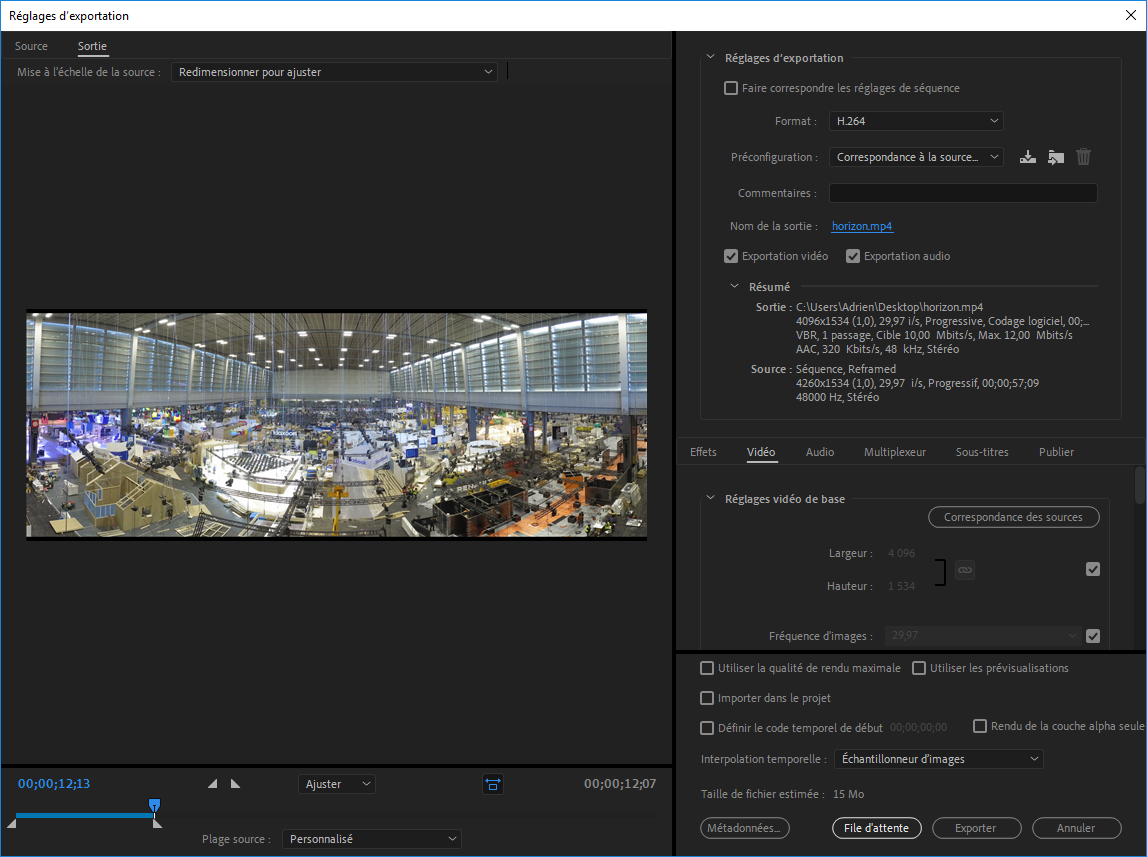 We hope you enjoy this article! See you soon for a new technical article;)