50% off accessories with the purchase of a Tikee 3 PRO - discount in the shopping cart*. 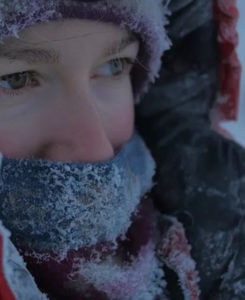 Heïdi Sevestre was born in 1988 in Gruffy in Haute-Savoie. After spending all her childhood in her home town, she decided to study in Lyon, where she obtained her “BSC in Physical Geography” in 2009. She then specialized in glaciology, a field in which she has a PhD, the equivalent of a doctorate, from the University of Svalbard in Norway.

This glaciologist bases her research mainly on field experiments. She specializes in the study of the dynamics and movements of glaciers: she lived in the Arctic until the end of her thesis in 2015 to better analyze the subject. She is also studying the structure of ice shelves, an English term for glaciers stretching over the sea in Antarctica.

1. Can you say a few words about your job?

Glaciers are fabulous climate barometers, they react very quickly to climate change. Our job as a glaciologist is to try to understand the response of glaciers to climate change, and to predict the contribution of glaciers and ice caps to rising sea levels. This is not an easy task, and among other things asks us to understand the dynamics of glaciers, how they move, how fast, to predict the amount of ice they will win or lose in the future.

2. How would you define the time lapse?

The time lapse is an imaging technique that captures the landscape at regular intervals at time t. The images, once assembled in video, allow us to reconstruct the accelerated landscape changes.

The time lapse is revolutionizing glaciology. Thanks to simple and autonomous systems like Tikee we can see the invisible, and reveal glacial dynamics that we could never have observed with the naked eye, or on time scales from a second to hour.

4. What phenomenon(s) does it allow you to observe?

I am particularly interested in the phenomenon of glacial surges. This phenomenon, unknown to the general public, remains one of the greatest enigmas in glaciology. Some glaciers have the ability to accelerate for several years, reaching crazy speeds between 1 and 50 m per day! It’s the surge. Once the surge is over, the glacier goes into “hibernation” for several decades … before starting to overflow again. Water is one of the keys to this phenomenon, especially when it accumulates under the glacier and allows it to slide extremely fast. For us, the time lapse is the most appropriate tool for the study of glacial surges. The cameras can capture the birth of the surge, the acceleration of the glacier and the end of the acceleration. It is very easy to measure the velocities reached by the glacier in this way. The images can also reveal the entrances and exits of water, and understand why and how the glacier surges!

5. Do you think the time lapse can help alert public opinion to the climate emergency and encourage them to take action?

The scientific community has a key role in explaining the causes and consequences of climate change. This phenomenon is very complex, and sometimes we have difficulty showing how much the landscape and the glaciers are already changing as a result of climate change. Associating our scientific message with time lapse videos of the retreat of glaciers is for us the best way to show the urgency of the situation. Seeing a glacier retreat for hundreds of meters in just a few months, whether one is a glaciologist or not, is extremely talkative, and shocking.

6. What are your future time lapse projects?

Next year I will launch a project to document the disappearance of tropical glaciers, and show the impact of climate change in mountainous regions of the tropics where people depend directly on glaciers. This project is called “The Last Tropical Glaciers”. We are going to install time lapse cameras near these glaciers, and produce a whole series of documentaries to tell the story of these populations who will very soon lose their glaciers.

7. What is the typical day of a glaciologist?

The typical day of a glaciologist depends on its geographical location! If, for example, I am in the office, I try to process my data, publish them in scientific journals, and seek funding for future projects.

But my favorite part of the job is to be on the ground! And there, no routine, our schedule changes every day depending on the weather. Winter or summer, we usually live in camps of several tents. We start the day with a good breakfast, usually porridge that fits well to the body (and sticks to the teeth) and fill our water bottles with hot water to keep us warm. Then we approach the glacier by the sea (zodiac, kayak, boat), by land (on foot, snow scooter) or by air (helicopter). The work can be dangerous, we are approaching very active glaciers, especially cracked so we must be vigilant. With time lapse devices, we deposit them on the (most stable) mountains around the glacier. This is not so easy in Svalbard, the ground moves constantly (melting of permafrost) and the mountains are not strong because of the incessant alternation between freeze-thaw.

8. What is the relationship between time lapse and bears? Do you have an anecdote to tell us?

Ahaha! A large part of our Glaciers On The Move project is going on in Svalbard, which is a bit of a polar bear kingdom. There are more bears than inhabitants. Bears have an outstanding smell, and are by nature extremely curious animals. So, often, our cameras are visited by polar bears, to our joy or to our great damnation! In August 2018, after installing new boxes around the Tunabreen glacier we learned that the beautiful family of bears that we had observed before had been a joy to completely destroy the most important case for our project …. They must have been disappointed, not much to eat in there.
Bears are also our “easter eggs” that sometimes hide in the time lapse! The first thing I do when I get the card from a box is to look for bears, once the initial checks are done.

Thank you very much Heidi!

And to follow the Glaciers On The Move project, go there.

Other Subject on Science and Time-lapse