Did you know that it is possible to say that the confinement we are currently experiencing has made it possible to reduce the number of “risky” interactions in the public space by at least a factor of 10? And this, by taking only 6 wide-angle photos per hour.

Social distancing measures are everyone’s business. And it is important for everyone to be convinced that the rules are respected by the population as a whole, in an objective manner, so that a feeling of injustice is not added to the difficulty of isolation.

It is the task of the municipalities and metropolises to ensure that these measures are complied with. They sometimes do so through local initiatives (limiting jogging in Paris, curfews and drones in Nice, etc.) whose validity can be questioned, often due to a lack of figures to justify their necessity and quantify their effects.

In a previous post I showed how a tool initially designed for time-lapse capture could be used to provide valuable data on the understanding of a public space in the long term. The impact of containment was clearly quantifiable in terms of the frequentation of the observed area. Here I will go further in the presentation by showing you that the same data set can be used to extract the evolution of social interactions over the last few weeks.

Respect for privacy and the restriction of individual freedoms are two subjects to which we are sensitive. Solutions such as camera surveillance systems or phone tracking are often perceived as too invasive because they can be traced back to the individual. At the level of a commune, or a community, it is of little use to us to know if Peter stood too close to Paul for 15 minutes. On the other hand, it is very interesting to know that the new measure to encourage citizens to keep their distance has reduced the number of risky interactions by 50% over the week.

To begin, in addition to the previous post, here is the relative evolution of the frequentation of a crossroads representative of a large French metropolis around the announcements of March 12 and 17, 2020: 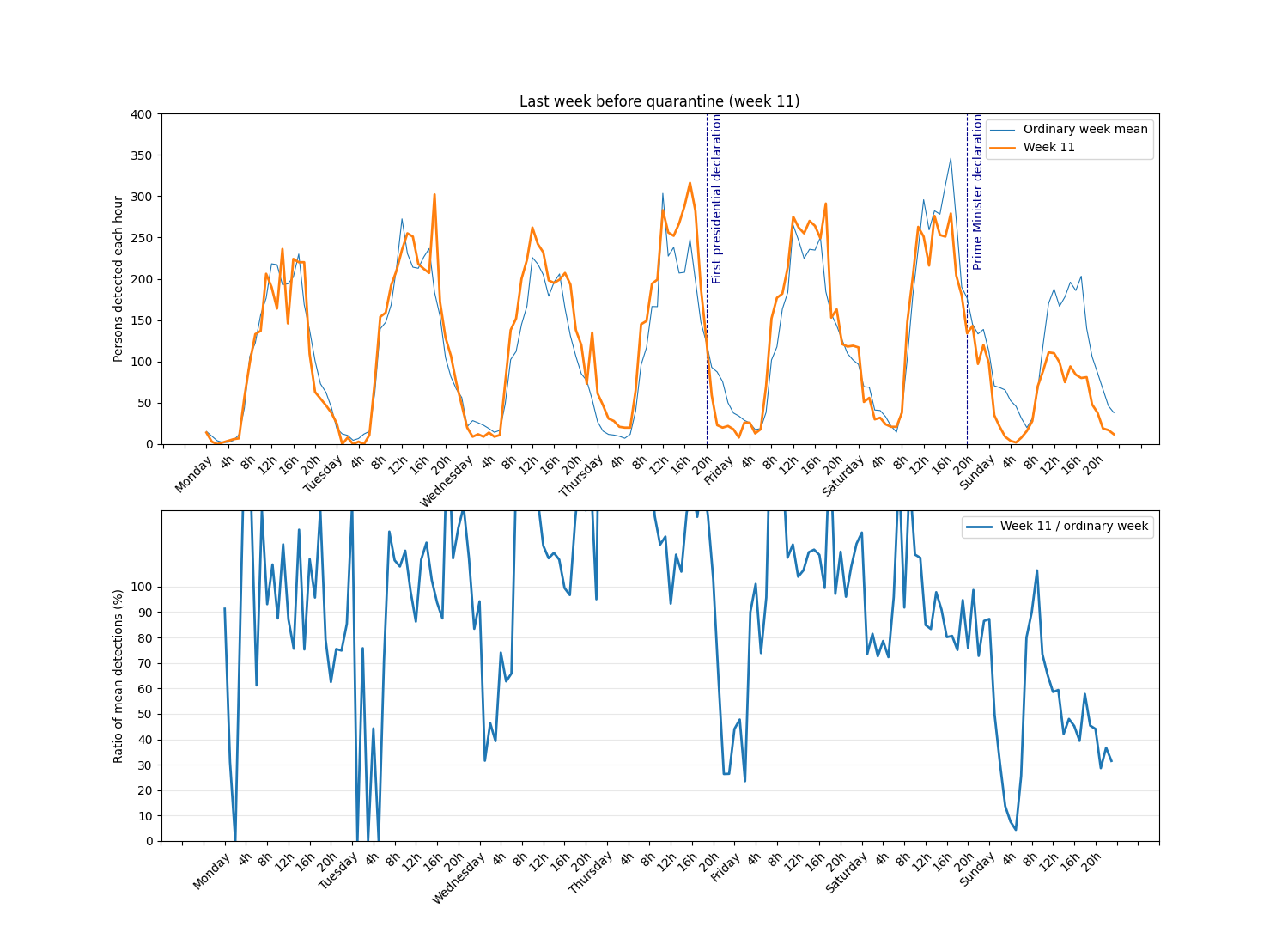 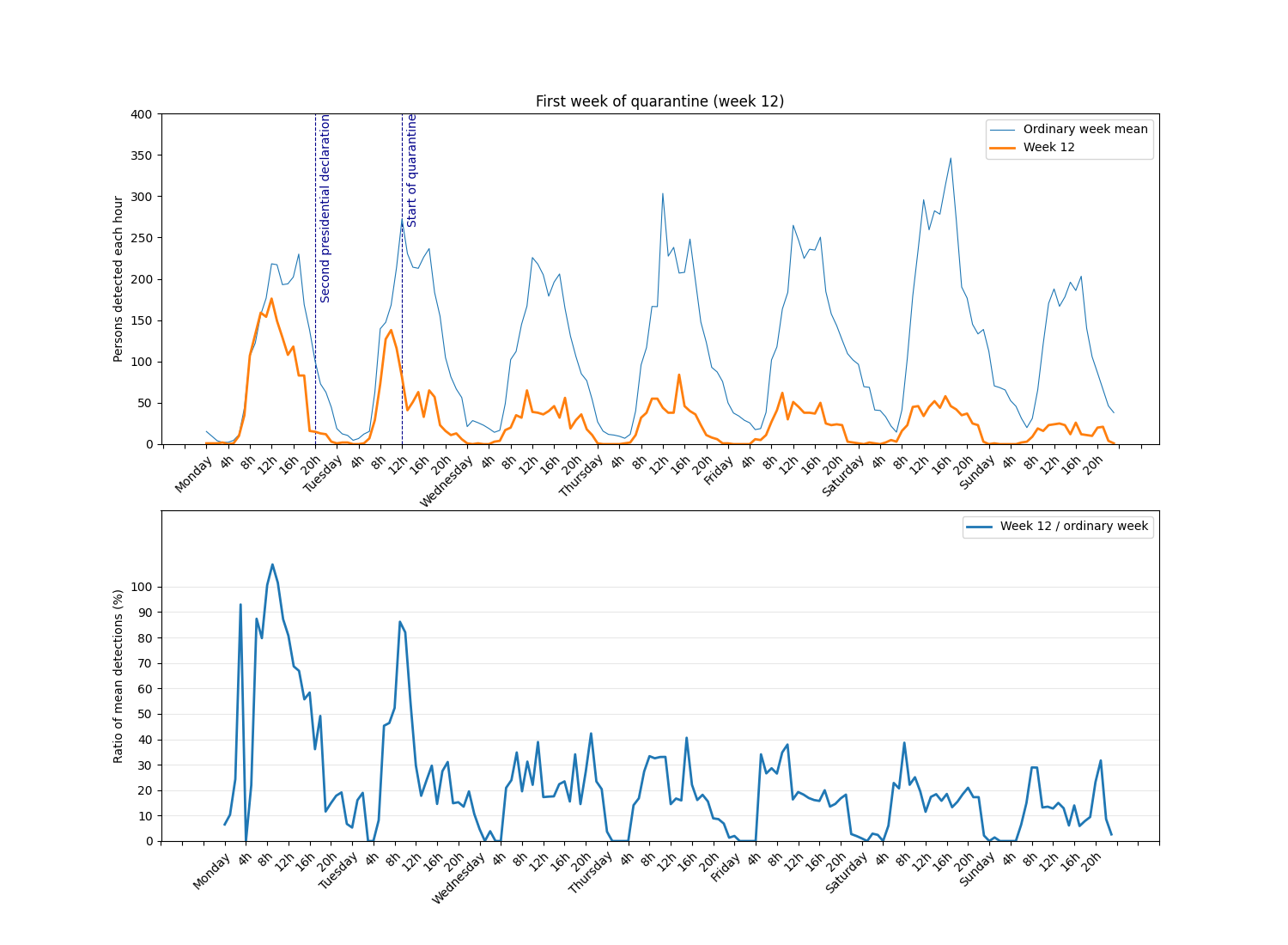 These graphs show that pedestrian use of this area has drastically decreased after the containment measures were taken. Traffic has been divided by 4 and these figures are stable over time. We can also see that the difference between the week/weekend has been decreasing since week 12.

Attendance is a macro measure, but it is not precise enough in the current context: the observed population has certainly reduced, but nothing is known about its spatial distribution. In the absence of other information, we can only hypothesize that individual behaviour has not changed and that social interactions at risk have therefore been reduced by 75%.

With a little geometry in space and some assumptions about the camera installation, it is possible to model a 3D plane in the image and thus locate the detected persons.

This makes it possible to map the location of pedestrians on the ground but also, and more importantly, to calculate a metric distance between them:

But what will be of particular interest to the public authorities is the evolution of the number of cases of people who are within 1m of another.

In the graph below, we see the number of these interactions in normal periods (average behaviour over the first 11 weeks of 2020), in blue, and the same data for last week (S15), in red. 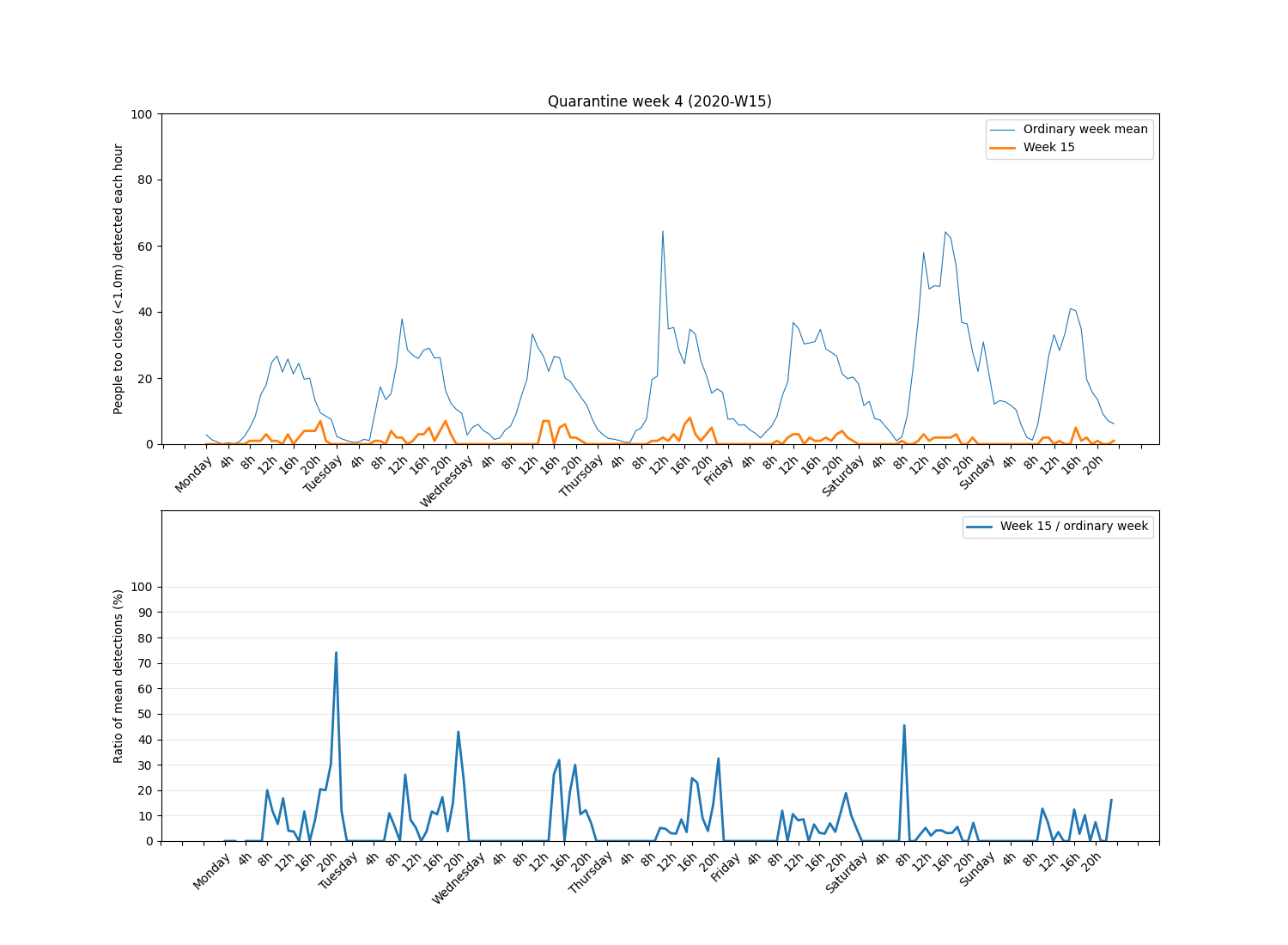 There are less than 10% of the number of risky interactions compared to a typical week. That is a risk reduction factor greater than 10!

I am convinced that these measures can be of great interest to public authorities:

We are also allowed to be optimistic and proud to see that the containment and distance between people are rather well respected. Keep in mind that the spread of such a virus is exponential, and that by reducing the number of interactions within a population in the public space by a factor of 10 (the famous R0!), we contribute to reducing the congestion of our health services.

Adrien Fontvielle –  R&D leader – Camera systems and image processing at Enlaps
How do you know if people are respecting social distancing measures in your city while respecting their privacy? Is it really necessary to deploy drones or ban jogging? Accurately measure the impact of public decisions without individual tracking.
← Previous Next →