In the previous posts we explored what kind of data could be extracted from images of a timelapse, such as social distanciation, touristic site affluence or construction site security equipment. We even paved the way to affluence prediction based on external datas such as weather information. Now let’s imagine you have a fleet of time-lapse cameras observing the same kind of scene, say a construction site. The potential of insights you can get from it is tremendous: you could precisely monitor the global activity of your business, remotely, seek for the influence of externalities such as weather, national holiday, or supply shortage, and even get a precise overview of the year's activity and compare it to the previous years.

The full dataset encompasses over 20 million images from over a thousand construction projects located in 43 countries, from September 2017 to September 2021. It was used to train an AI model specifically focusing on construction site activity tracking and not being distracted by neighboring activities. An example of a computed activity heatmap is shown in the following image.

The comparison of construction activity between countries will be based on data from France, Germany and the United Kingdom where we have more accurate results. We focus on 2021 since it’s the most complete in terms of the number of projects per day, has no data gaps and is only mildly affected by the COVID-19 crisis. 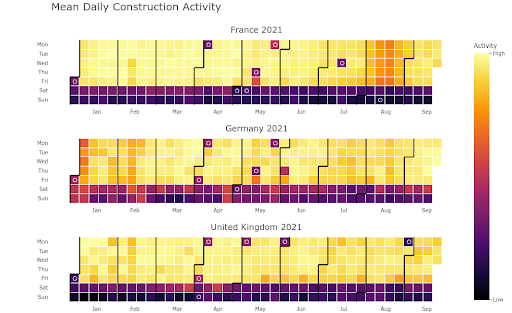 Figure 1 shows the daily mean activity for the 3 countries in 2021 with lighter colors indicating high activity and darker colors low activity. White circles mark the national holidays of the respective country, and it is apparent that activities are low for these days. Additionally, less activity is detected on those days that are “sandwiched” between a national holiday and a weekend (e.g. Friday the 20th of May for France and Germany). This phenomenon may be brought about by those workers who decided to take an extra annual leave. Notably, construction activity is low on the 3rd of June in Germany, which is a regional holiday celebrated in parts of Germany.

There’s a clear division between weekdays and weekends in terms of construction activity for all 3 countries, but this division is less evident for Germany and the United Kingdom. This may imply that working on weekends is more widely accepted in these 2 countries.

A close scrutiny reveals that construction activity is detected on Saturdays in these 2 countries, but that all activity stops soon after noon (figure 2). This pattern may be due to the local regulations that limit construction work at certain hours of the day to reduce the level of noise. It seems that the 3 countries tend to start work at different hours, but they all agree that work should finish early on Fridays. 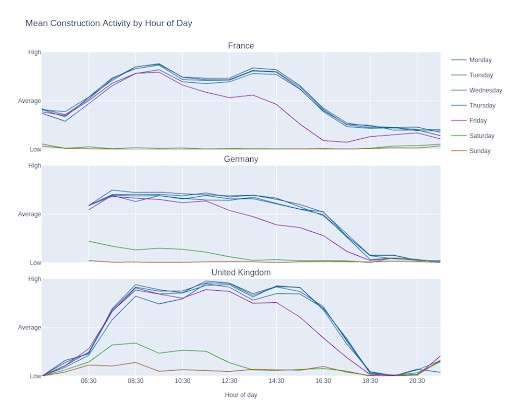 Next we turned our attention to France which is the country with the most projects by far. Figure 3 shows the daily mean construction activity since 2019. As noted earlier, national holidays are well respected. Furthermore, graphs for 2019 and 2021 show that the summer and winter holidays are periods of low activity made apparent by bands of darker colors during the 2 seasons.

The COVID-19 crisis evidently took its toll in 2020. Construction activity remains low for the most part of the national lockdown in France (marked by white triangles). The 1st of May, referred to as la Fête du Travail, is a special day in France when employees are legally obliged to be given leave. It is the day to rest from work. This is well respected in other years, demonstrated by the very low construction activity scores for that day. In contrast, the score of the same day doubles in 2020. Likewise, summer and winter holidays that can be distinguished by the bands of darker colors in figure 3 are less conspicuous in 2020. It can be envisaged that the imposed restrictions during the lockdown increased the remaining workload, forcing more work to be done on holidays. This hypothesis was later confirmed by some professionals in the industry we contacted. 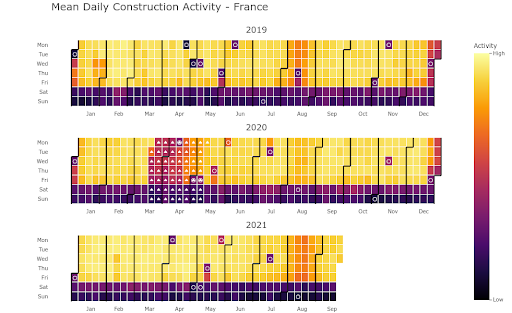 Construction activity in regions of France

Figure 4 shows a bubble map of France where each point represents a construction project. The color and size of the points reflect the mean construction activity score of the week indicated (excluding weekends). In line with the observations above, the weeks of low activity appear to correlate well with holidays and the national lockdown period. There are no striking differences between regions regarding construction activity. The pattern variations observed seem to be on a national level.

Influence of weather on construction activity

Finally, we’ll estimate the impact of weather on construction activity in France. Temperatures can rise well above the thermal comfort zone in summer, and this is likely to influence the working hours for construction. 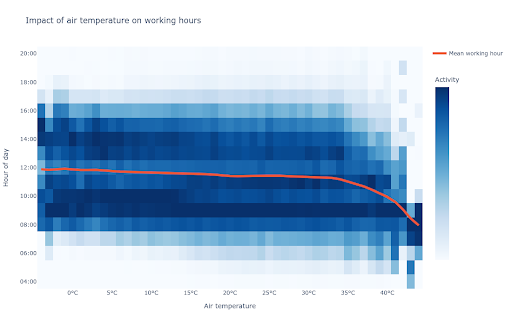 Below 35°C, it appears that the construction activity occurs during normal working hours, between 6 am and 6pm. Under such conditions, workload seems almost evenly distributed between the morning and the afternoon. A less obvious observation would be that with increase in the maximum air temperature, working hours tend to be longer, but the distribution of workload between the morning and the afternoon appears to be preserved. This might reflect the changes in the duration of daylight between the seasons. Between winter and summer in France, the duration of daylight can vary from around 8 hours to over 16 hours.

When the maximum air temperature rises above 35°C, work tends to finish much earlier than usual, forcing more work to be done in the morning. If we consider that air temperatures peak in the afternoon and that working under sizzling temperatures can lead to heat-related illnesses and injuries, this shift in working hours doesn’t come as a surprise.

In the months to come we will continue tracking construction activity on a global scale. It is expected to be an unfortunate, but an interesting period to study as many contractors may face difficulties to get their hands on raw materials (due to high global demand and supply chain shortages), which might lead to slowed construction activity.

On a more general level, this study highlights the great potential of insights that can be leveraged by automatically aggregating data extracted from many cameras. We are here making macro analysis, made possible thanks to a fleet of thousands of cameras on the field. There’s no doubt that many interesting facts can also be extracted from smaller, more specialized, sets of cameras, such as those owned by the big players in the construction industry.

Other ways to use timelapse in construction site